The head of the regional delegation of the International Committee of the Red Cross for the Gulf Cooperation Council, Omar Odeh, affirmed that Kuwait is one of the first regional nations to provide assistance to the International Committee of the Red Cross, for decades, extending thanks and appreciation to Kuwait’s leadership, government and people, for all their interest in the work the Committee, as well as the continuous cooperation with the Ministry of Foreign Affairs represented by its Minister Sheikh Dr. Ahmed Al-Nasser, on the open, continuous and transparent dialogue with the mission in Kuwait, which also covers the countries of the Cooperation Council.

He said during a press conference held with media representatives on the occasion of the end of his term in the country, that the new head of mission, Mamadou Sou, is arriving in Kuwait this week, to continue the efforts of the committee in the region, pointing out that the Kuwaiti Red Crescent is a key partner of the International Committee of the Red Cross in light of the existence of an exchange of views to provide the best services to those affected in areas of armed conflict, whether in the region or around the world.

Odeh touched on the issue of Kuwaiti prisoners and missing persons and the efforts of the International Committee of the Red Cross in assisting the parties (Kuwait and Iraq) in identifying the fate of the missing, noting that last year, through the International Committee of the Red Cross and the tripartite committee concerned with the file of prisoners. He said 60 files of the missing persons were closed and the remains of two people from Kuwait to Iraq and Saudi Arabia were returned. 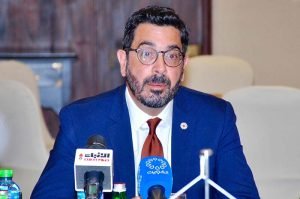 Odeh stated that for the first time since the 1990s, a meeting was held in Riyadh 3 weeks ago, in which the partners (Kuwait and Iraq) focused on the need for cooperation and effective work, to search for the missing, adding that “we hope to find new sites for the remains and achieve results which is important on the human level, adding, “I cannot say anything about the content of this meeting, whose work is characterized by confidentiality, and any announcement of the results must be documented and approved, even though the last Riyadh meeting was good and an achievement in itself,” he pointed out.

What the committee has achieved with the assistance of the concerned parties is to return the missing remains from Iraq and to identify their identities, and then hand them over to their families. Odeh touched on the events in Yemen, which he described as having a special situation for the presence of the participants in the conflict, pointing out that the rapid change of events on the ground, in turn, changes the nature of the committee’s work when entering unsafe areas, compared to other countries such as Syria and Afghanistan.

He elaborated “One of our responsibilities is that we are conducting a dialogue and discussion regarding providing aid in the conflict areas themselves, or monitoring violations or harming civilians, including Yemen, where there is a confidential and continuous dialogue with the coalition and the committee team in the Riyadh office, and during this dialogue, we talk about how to distribute daily aid to the affected people in Yemen, in cooperation with the commission’s missions in Sana’a, Aden and Hodeidah, through daily humanitarian activities.

On the level of other conflict areas in countries such as Syria, Afghanistan and Ukraine, Odeh pointed out that the Gulf Cooperation Council countries provide financial aid to alleviate the scourge of armed conflicts, in cooperation with our colleagues in Geneva.

He pointed to cooperation between the International Committee of the Red Cross and the Kuwaiti Ministry of Defense through courses for its members on the application of international humanitarian law, as part of an action plan that was agreed upon years ago, adding: I am grateful for this important development, as we were able to build and establish these awareness initiatives.

In response to a question about the accusations also directed at the International Committee of the Red Cross deducting large sums of state donations for the benefit of the Committee’s staff, Odeh explained that the delivery of aid to areas of armed conflict, including its great risks, needs international and local people, and this of course costs large sums, stressing that the bulk of these international donations reach their beneficiaries, despite all obstacles.