His Highness the Crown Prince said, “We have decided to invoke the constitution, dissolve the National Assembly, and call for general elections in the coming months.”

His Highness added: “To get out of the political scene, with all its differences and conflicts, and give priority to personal interests and behaviors that threaten national unity, we have seen, based on our historical and national responsibility before God, we have decided to resort to the people.”

His Highness went on to say, based on the current political stalemate and based on the desire of the people, and based on our constitutional right to Article 107, we have decided to dissolve the National Assembly and call for general elections.”

Here is the full text of the speech:

“In the name of God, the Most Gracious, the Most Merciful. Praise be to God.

Brothers and sisters (sons of my dear country), I greet you with the greeting of Islam. Peace, mercy and blessings of God be upon you. At the outset, I would like to convey to you the highest greetings of His Highness Sheikh Nawaf Al-Ahmad Al-Jaber Al-Sabah, may God protect him and care for him with good health.

Brothers and sisters (sons of my dear country), God Almighty has entrusted us with the governance of the nation as it is a trust, a mandate, not an honor, and we swear by God the great oath to preserve this trust generation after generation.

We will not deviate from the constitution, nor will we amend, revise, suspend, or even prejudice the constitution, as it will be in a safe place. It is the legitimacy of the government and the guarantee of its survival and the close covenant between us and you and the welfare of its people loyal to the first generation who built and protected Kuwait, recalling the respect and appreciation of the whole world for Kuwait as a state of institutions and with a pioneering democratic experience and a beacon for charitable and humanitarian work until the small Kuwait became lofty in its size at the Arab and international arena and requires everyone, as partners in the responsibility of managing the country, the people and the ruling family, to make every effort to strengthen its position, achieve its stability, ensure its cohesion, and confirm its national unity, which has always been the source of its strength and elevation.

“My brothers and sisters (children of my dear country), in the midst of this turbulent world, how much we need to be cautious and learn lessons, because crises, challenges and dangers of all kinds and forms surround us from every side.

We hardly finish one crisis or disaster until we enter another, and this is a harbinger of a vow. With all this and the aftermath of the Corona pandemic, its effects and repercussions which still longer around, we are facing all these crises, challenges with great regret which harms the welfare of the people.

This is all due to the disturbance in the relationship between the legislative and executive authorities, the interference of the legislature in the work of the executive, and the executive’s abandonment of performing its required role in the correct manner, and the lack of commitment by some to the great oath that they had pledged themselves to work to achieve political stability and dedicate its service to the country and citizens.

What resulted in all of this, with great regret, are the practices that threaten national unity and do not comply with the aspirations and hopes of citizens, nor with what we have pledged to our forefathers to preserve the integrity of the country; follow-up, accountability, and the lack of clarity in the future vision of government action, which resulted in obstruction and delay in the development process and the failure to achieve the aspirations and legitimate hopes of citizens.

My brothers and sisters (sons of my dear country), and in order to respect the provisions of the Constitution and to preserve the principle of separation of powers with their cooperation, we made it a duty to refrain from direct interference in the administration of the state, leaving this administration to the legislative and executive authorities.

No one is allowed to undertake any measures, reforms, or actions that achieve the interest of the country and people.

However, we did not perceive through that administration of the state any results, achievements or actions that achieve the aspirations and desired popular hopes.

To the contrary, the government administration and parliamentary practice have led to the citizens’ discontent and dissatisfaction with the work of the legislative and executive authorities.

Brothers and sisters (the sons of my dear country), the stability of the country, the completion of its renaissance, the consolidation of its status, the consolidation of its democratic practice, and the realization of the aspirations and hopes of its people require us, as the political leadership of the state, to pause for self-reflection, frankness that embodies the keenness to adhere to our national unity and not to compromise or prejudice it.

My brothers and sisters (sons of my dear country), since the people are the foundation of our first and last goal and that they have the last say in determining their destiny and achieving everything that would enhance their position and elevate their status, we have seen that getting out of the current political scenario with all its incompatibility, lack of cooperation, differences, conflicts and predominance of personal interests, non-acceptance of some by others, practices and behaviors that threaten national unity.

It is a combination of all of the above, we have seen out of our historical and national responsibility before God Almighty and in response to our national and constitutional duty before our people, we have decided to resort to the people to rule our destiny, extension, survival and self existence and correct the course of the political scene again in a way that achieves its higher interests.

Our goal in this solution is the constitutional, firm and sincere desire for the people themselves to give the final word in the process of correcting the course of the political scene again by choosing their representatives, the correct choice that reflects the aspirations and hopes of this people.

A decree of dissolution and calling for elections will be issued in the coming months, God willing, after preparing the necessary legal arrangements.

My brothers and sisters (sons of my dear country), and out of our desire to confirm and strengthen popular participation as one of the pillars of governance, we would like to show you that we will not interfere in the people’s choices for their representatives, nor will we interfere with the choices of the next National Assembly in choosing its president or its various committees so that the Council will be the master of its decisions.

We also will not support one group at the expense of another. Rather, we will stand at the same distance from everyone whose goal is to open a new bright page, God willing, for the benefit of the country and citizens.

Brothers and sisters (sons of my dear country), the next stage requires you to test your true representative that reflects your aspirations, achieves your hopes and implements your desires. Everyone’s homeland is an oasis of safety and security.

We would like to point out to you that the incorrect choice of your representative will harm the interest of the country and the people and will bring us back to square one to an atmosphere of intolerance, rivalry, non-cooperation, and giving priority to personal interests at the expense of the homeland and citizens.

Election and keenness to choose the strong, faithful, faithful in God and then his country, and who puts the interest of Kuwait and its people above all considerations is in the hands of the voter.

We appeal to you, our dear countrymen, not to miss the opportunity to correct the course of national participation so that we do not return to what we were before, because this return will not be in the interest of the country and the citizens, and in the event of its return we will have other measures of heavy impact and event.

Brothers and sisters (sons of my dear country), allow me, on your behalf, to send a message to both the legislative and executive authorities, including the assumption of national responsibility in the next stage, and that cooperation between them takes place in an atmosphere of consensus and understanding.

We also call on everyone to rally around the leadership of His Highness, the Amir of the country, may God protect him, while not overstepping his powers guaranteed by the constitution, avoiding unconstitutional and illegal behavior, not interfering with intentions, misleading public opinion, and all that harms the security and stability of the nation.

In conclusion, we prostrate before God, humble ourselves, praising Him, thanking Him for His innumerable graces and blessings, and we ask Him, the Almighty, to protect Kuwait and its people from the temptations that appeared from them and what is hidden, and to direct our path and to guide us for what is good for the country and the servants under the leadership of His Highness, the Amir of the country May God protect him and keep him safe and sound.

And our last prayer is that praise be to God and may God’s peace, mercy and blessings be upon you.” 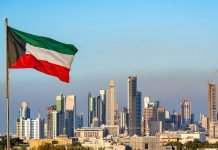