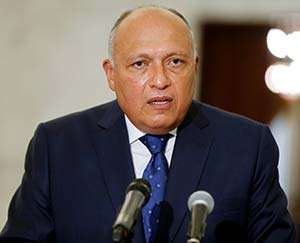 The human cost of climate change is making headlines almost daily. In a world of rising geopolitical tensions and daunting economic challenges, how can we seize the opportunity the upcoming UN Climate Change Conference offers to inspire an approach to mitigation and adaptation that is based on trust, justice, and equity?

Some fear that this year’s United Nations Climate Change Conference — to be held in Egypt on 6 to 18 November — will be an unintended casualty of the geopolitical tensions and economic challenges the world is facing. I believe the opposite: COP27 represents a unique and timely opportunity for the world to come together, recognize our common interests, and restore multilateral cooperation.

The human cost of climate change is making headlines almost daily. Global warming is no longer a distant or theoretical threat, but an immediate material one — a phenomenon that affects each of us, our families, and our neighbors. No society has been left unscathed by more frequent and intense droughts, wildfires, storms, and floods. Millions of people are already battling for survival.

And that is with temperatures having risen by just 1.1° Celsius, relative to pre-industrial levels. As the Intergovernmental Panel on Climate Change has made clear, every additional tenth of a degree makes matters worse. Yet the changes needed to avert catastrophe are not being made, at least not fast enough, and the developing world is increasingly frustrated with rich countries’ refusal to pay their fair share for a crisis for which they bear overwhelming responsibility.

But there is reason for hope. In my discussions with delegations around the world, I see their determination to make COP27 a success. Already, societies are starting to act. Climate adaptation and new forms of collaboration are gaining traction, and investment in climate tech is booming. This includes new carbon-removal technologies, electric transport solutions, and renewable energies. As a result, clean-energy prices continue to fall: almost two-thirds of renewable power added in G20 countries in 2021 cost less than the cheapest coal-fired options.

My country, Egypt, is on track to produce 42 percent of its energy from renewable resources by 2035. At the same time, civil society is devising mechanisms for holding companies and governments to account, guarding against greenwashing, and ensuring a just transition. There is a new focus on restoring nature.

More ambition, scale, and speed are needed, and the rules remain unclear or contested. But a process is underway, and there is no going back. Even in countries that might seem to be wavering in their commitments – say, by investing in fossil-fuel infrastructure – officials insist that stopgap measures necessitated by immediate challenges should not be mistaken for long-term strategies. No one doubts the greener road ahead.

The question for those of us who will participate in COP27 is straightforward: How can we seize the opportunity the conference offers to create a sense of common endeavor, prevent backsliding, and inspire an approach based on science, trust, justice, and equity?

At its heart, climate action is a bargain. Developing countries have agreed in good faith to help tackle a crisis they did not cause, on the understanding that support, particularly financial support, would be provided to complement their own efforts, which are often limited due to their scarce resources and competing development needs. Developed countries must uphold their end of that bargain, by supporting both mitigation and adaptation, thus fulfilling their envisaged responsibilities in the Paris agreement.

On the mitigation front, we must move from rhetoric to action in cutting our greenhouse-gas emissions and removing carbon from our atmosphere. All countries must embrace more ambitious Nationally Determined Contributions, and then translate those pledges into programs. We must act now to ensure appropriate resources are available to developing countries to unlock their potential.

At the same time, we must craft a transformative adaptation agenda, so that communities, especially in climate-vulnerable regions, can protect themselves from the effects that are already unavoidable. The bill for this agenda must be divided fairly. To date, a disproportionate share of climate finance has been directed toward mitigation, leaving developing countries largely to fend for themselves in financing adaptation investment. But even the finance provided for mitigation is far from sufficient and has not been delivered with the appropriate instruments.

In 2009, developed countries pledged to provide $100 billion annually for climate action in the developing world by 2020. This is only a small portion of the more than $5.8 trillion that is needed (up until 2030), according to the UN Framework Convention on Climate Change’s Standing Committee on Finance. And yet this amount has not been delivered. We need an increase in the scale of finance pledges – especially for adaptation – at COP27, compared to those made at COP26 in Glasgow.

Developed countries must also honor the pledge they made last year to double adaptation finance by 2025, and they should provide the assurances needed for the Green Climate Fund’s new replenishment.

And the time has come to address the loss and damage suffered by countries that did not cause the climate crisis. This remains contentious, but I believe that we can approach it constructively, guided by the priorities of developing countries, for the benefit of all.

A just transition must account for the needs of various regions. For example, African countries are committed in principle to adopting renewable energy and refraining from exploiting their fossil-fuel resources. But 600 million people in Africa — 43 percent of the continent’s population — currently lack electricity, and around 900 million do not have access to clean cooking fuels. The climate-action bargain demands that this be addressed, and the continent’s broader development needs be met, in sustainable ways.

All of these imperatives must be pursued together, with a carefully designed package of actions, rather than through piecemeal measures. They are the pillars of a just transition. If one is missing, the entire edifice collapses.

Ahead of the 2015 COP in Paris, few believed that an agreement would be reached. Yet delegates from all over the world came together, and through skill and perseverance, reached a groundbreaking deal. In 2022, we face even higher hurdles, so we must work even harder to clear them. If we do, we will usher in a new age of clean energy, innovation exchange, food and water security, and greater climate justice.
As daunting as this challenge is, we have no choice but to confront it. We must negotiate with one another, because there can be no negotiating with the climate.